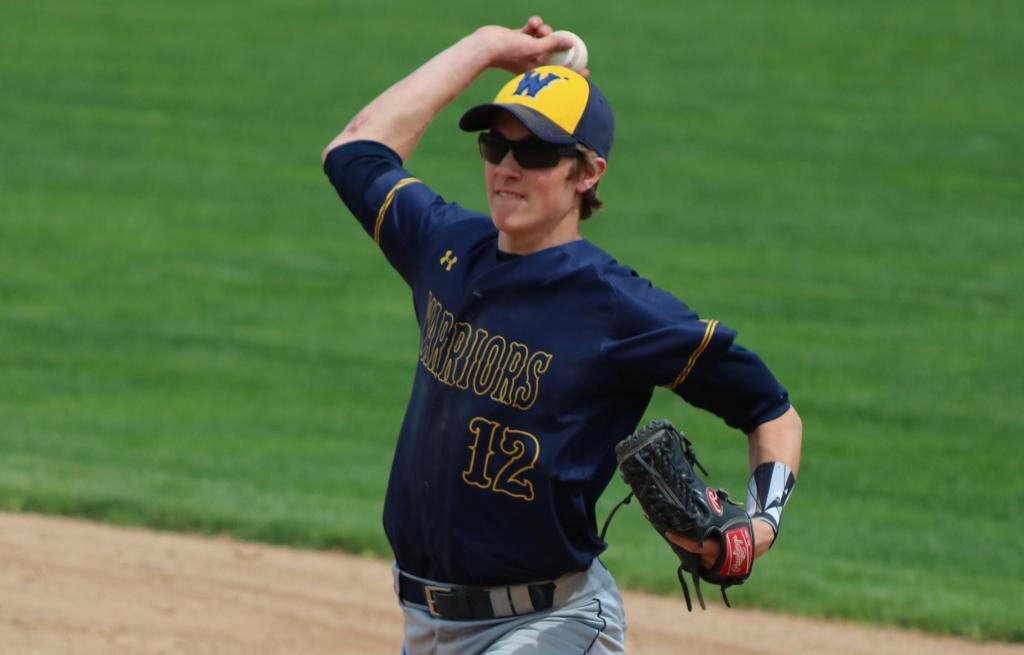 Wausau West's Jack Eder throws to first base in a game in Eau Claire on May 12 (Photo by Spencer Flaten for Wisconsin Baseball Central).

Since starting the season 4-3, the Golden Beavers have won seven games in a row to crack the top 15 for the first time this year. They were 3-0 last week, beating Reedsburg, Sauk Prairie and DeForest. During their win streak, they’ve allowed more than two runs in a game just twice. They have games against Milwaukee Reagan, DeForest and Waunakee (honorable mention this week) this week, as well as Portage over the weekend. The matchup with Waunakee on Thursday could very well decide who wins the Badger North.

The Red Robins have breezed to an 18-1 record so far this season. They picked up a nice win over Holmen (honorable mention this week) on Saturday. They’ve played a relatively weak strength of schedule thus far, but it’s going to seriously ramp up this week. They face No. 2 Sun Prairie on Friday, and have triangular matchups with Kenosha Bradford (honorable mention this week) and Beloit Memorial on Saturday.

The Raccoons dropped a nonconference game against No. 2 Sun Prairie on Monday, but won two Classic 8 Conference matchups with Hartford later in the week. That leaves Oconomowoc in second place in the league, one game behind No. 1 Arrowhead with two games remaining. The Raccoons face Catholic Memorial on Monday and Tuesday, and cannot afford to lose if they want to get at least a share of the regular season conference title.

The Cardinals won three games last week, bringing their record to 13-5. They remain right in the hunt for the Big Eight Conference title with No. 2 Sun Prairie and No. 3 Janesville Craig – Middleton has beaten both of those teams already this year. They’ll look to complete a sweep of Craig when they square off with the Cougars on Monday.

Since starting the season 4-3, the Hornets have won six in a row to push that record to 10-3. In that span, they have held opponents to an average of one run per game. Their pitchers have been strikeout machines, led by sophomore Vanderbilt recruit Ryan Stefiuk – in his last two starts, he has 17 combined strikeouts. Preble has a key Fox River Classic Conference matchup with Bay Port (honorable mention this week) on Tuesday, as well as games against Sheboygan North and Ashwaubenon over the rest of the week.

The Trojans split two games with Kenosha Bradford (an honorable mention this week) last week, bringing their record to 11-2 this spring. Things are setting up for an interesting finish in the Southeast Conference, and Tremper is right in the thick of it. They face Bradford, Racine Horlick and Westosha Central (also an honorable mention) this week.

Beau Schumacher hit a walk-off grand slam on Saturday to power the Papermakers to a 9-5 victory over Appleton West and push Kimberly’s record to 11-4 on the season. The Papermakers went 3-0 last week and have won their last five contests. They hold a slight edge over Hortonville in the Fox Valley Association standings, and have a big game against the Polar Bears coming up in two weeks. This week, Kimberly faces Oshkosh West (honorable mention this week), Fond du Lac and Appleton West.

The Panthers have lost three games in a row, dropping their record to 12-5 this spring. That has made things interesting in the Southern Lakes Conference, as six of the league’s eight teams could still realistically grab the title. One of those teams is Burlington, and Wilmot has two games against the Demons this week that could prove very influential.

The Panthers split a key Wisconsin Valley Conference doubleheader with Wausau West (honorable mention this week) on Monday and now sit at 13-2 this season. They’re in a three-way tie with West and D.C. Everest (also an honorable mention) atop the conference, and they face the Evergreens twice this week. They also square off with De Pere on Saturday.

The Wolverines were 1-1 last week, splitting two games with Burlington (honorable mention this week). They’re now 12-4 this spring and are locked into a tight race for the Southern Lakes Conference crown with a number of teams. They’ve got two games against one of those squads this week: Union Grove (11-6).

The Phantoms have won five games in a row and are 15-3 this season. They’re on course to run away with the Bay Conference title. In four games last week, they scored an average of 9.25 runs per game. Their pitching staff has held opponents to two runs or fewer nine times this spring. West De Pere plays two games apiece against Fox Valley Lutheran and Shawano this week.

The Huskies are on a six-game win streak after sweeping both Chippewa Falls and Wausau West (honorable mention this week) last week. They’re 12-1 this spring and they have beaten every team from Wisconsin they’ve come up against. During their win streak, they haven’t allowed more than two runs in a game. They’ve got the biggest week of their season to date ahead of them. Two crucial Big Rivers Conference matchups with Eau Claire Memorial (honorable mention this week) await, as well as a Saturday doubleheader with La Crosse Central.

A 3-0 week has the Cougars sitting at 15-2 this season. They beat Madison East once and Madison Memorial twice, outscoring opponents 30-7 in those games. They’ve got a tough final two weeks of the season ahead, starting with a rematch with No. 12 Middleton on Monday. Craig lost to the Cardinals early in the year, and a win to even the series would go a long way in the Big Eight Conference title chase. The Cougars also have another shot at No. 2 Sun Prairie looming next Monday.

The Cardinals ran the gauntlet last week, finishing 5-0 after a busy slate of games. The highlights were wins over No. 13 Oconomowoc and Waunakee (honorable mention this week), and Sun Prairie is 15-3 at this point in the season. Their resume features five wins over ranked teams which should only help come postseason time, where they’re paired with the likes of No. 1 Arrowhead, No. 13 Oconomowoc and No. 15 Beaver Dam in their sectional. The Cardinals face Verona twice this week.

The Warhawks retain the top spot in the rankings after going 3-0 last week, sweeping two games from Milwaukee Lutheran and beating Jefferson. They’re 13-2 now this season with seven wins over teams featured in this week’s rankings. They scored 28 runs in last week’s three games. Arrowhead adds to its tough schedule with games against Wisconsin Lutheran and No. 12 Middleton, as well as the Classic 8 Conference tournament over the weekend.