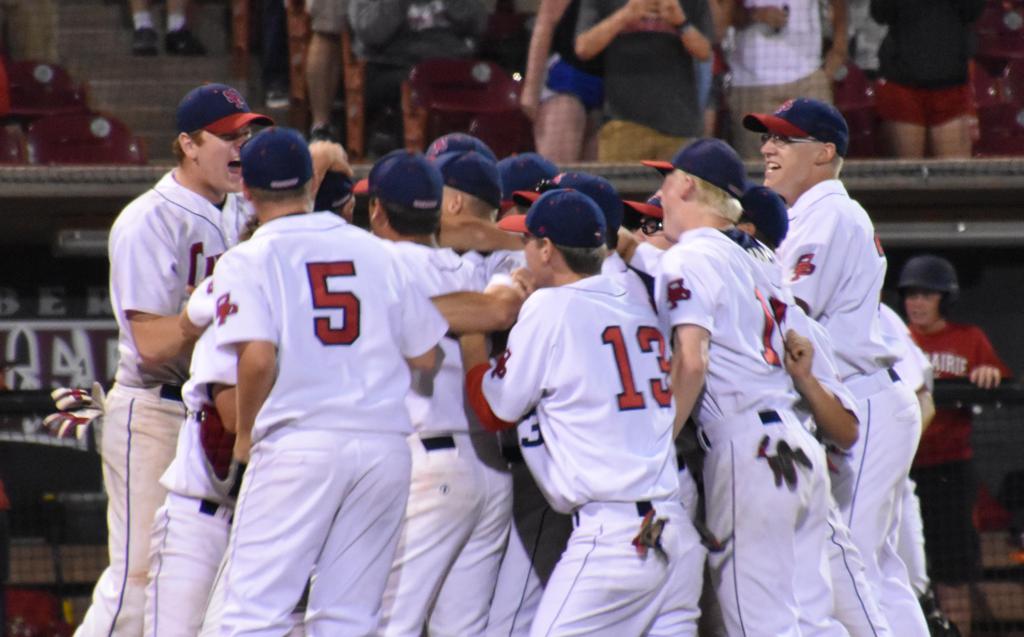 Opening day of the 2018 WIAA spring baseball season is on March 27. Hundreds of teams will compete for a state championship, but only four will be crowned champions in June. Which teams look like they'll have the best chance at hoisting the gold trophy at the end of the season? Here are our preseason rankings for Division 1.

Stevens Point – The Panthers bring back three of their top pitchers from last year after narrowly missing out on the Wisconsin Valley Conference title.

Eau Claire North – The Huskies have made two straight trips to state and have four returning starters this spring.

Oconomowoc – The Raccoons made it to the sectional finals and won 21 games, and have over half the lineup returning. They’ll need to replace their best pitcher and some of their best hitters.

The Red Robins went 22-3 last season and won the Great Northern Conference title. They lost in the Division 2 regional finals to Mosinee, and are moving up to Division 1 this season. They’ve got five returning starters from the lineup that was defeated by Mosinee, including two first team all-conference players. First team All-Great Northern infielder AJ Kirsch is joined by first team outfielder Matt Winter to lead the offense. McHenry County CC commit Brady Tatro also returns to the lineup.

Antigo figures to be solid on the mound again this season. Kirsch was a first team all-conference pitcher last year, and Tatro was named to the second team for his exploits on the mound. Indian Hills CC commit Nick Marshall also spent some time pitching last spring.

The Red Robins are the favorites to take home the Great Northern title again, something they’ve done five years in a row.

The Warriors were co-champions of the Badger North Conference last year and made their third trip to the state tournament since 2010. They fell in the state quarterfinals to eventual champion Kimberly, but they’ll have most of their roster back this season. They were a strong team on the mound last year, and they have some key pieces of their pitching staff returning. Ace Ben Nordloh (6-6, 1.93 ERA) was an honorable mention All-Wisconsin selection last spring, and Riley Ripp (3-0, 1.75 ERA), Derek Lee (2-1, 1.40 ERA) and Dylan Haack (1-1, 1.37 ERA) are all back too.

Waunakee’s pitching staff should help it win a lot of games and compete for another conference title. If the lineup can replace the production of a couple of its top hitters from a year ago, the Warriors could be in line for another deep postseason run.

The Panthers were 16-6 last season and lost in the regional finals to Kenosha Indian Trail. They’ll have almost their entire lineup back from that team, including some college-bound talent. The Petersons, Gunner and Tanner, are both Illinois State recruits. Gunner, a senior, hit .449 with 15 extra-base hits last year to earn second team All-Wisconsin honors. Tanner, a junior, batted .338 with seven extra-base hits and 17 RBIs. Justin Paasch (.286, 17 RBIs) and Winona State recruit Kyle Gendron (.279) are back as well. AJ Frisby’s status is uncertain—he suffered a serious injury in football season after hitting .321 last spring.

Gendron was Wilmot’s ace last year with a 6-1 record and a sterling 1.16 ERA in 54.1 innings. Gunner Peterson (24 IP, 3-1, 0.88 ERA) also brings back significant pitching experience, but the Panthers will need new arms to fill holes left by graduation. If that happens, Wilmot has the goods to compete with Burlington for the Southern Lakes Conference title.

The Old Abes fell in the sectional finals at the hands of Eau Claire North for the second straight year last spring after winning 21 games. Their lineup got hit hard by graduation, but they figure to have one of the best pitching rotations in the state this season. Minnesota State commit Jack Brown (8-1, 0.84 ERA) and East Carolina commit Zach Gustafson (3-4, 1.56 ERA) would both be aces on most teams in Wisconsin, and Minot State commit Austin Selz returns after posting a 2-0 record with a 2.01 ERA last year. Tennessee commit Tanner Kohlhepp is a hard-throwing fireballer who can add depth to the pitching staff, but it remains to be seen how much he’ll be used after pitching just three innings last spring. Freshman Vincent Trapani is one of the top pitchers in his class in the Midwest according to Prep Baseball Report, and if he’s on the varsity team the Old Abes get that much stronger.

Memorial only has three players returning to its lineup, so the Old Abes will need to piece together a new-look offense. Kohlhepp (.310 average, 12 extra-base hits) figures to be a big part of that, along with Mitch Froehlich (.286) and Kas Palzkill (.295). Still, with the pitching they have they should be able to win most games if they can score an average of three or four runs.

The Hornets were 29-1 last season, with their sole loss coming in the state quarterfinals against Eau Claire North. It was the second straight season Preble reached the state tournament, and the Hornets have a chance to extend that streak this spring. They’ll have to retool their lineup and pitching staff after losing a lot of talent to graduation, but they have a lot of upside coming through the ranks. Shortstop Max Wagner earned third team All-Wisconsin honors after hitting .404 with 14 extra-base hits as a freshman last year. Catcher Casey Roeser hit .321 with 25 RBIs, and outfielder Colin Dougherty batted .328. The rest of the lineup remains a bit of a question mark though.

On the mound, the Hornets have a pair of Division 1 recruits to lead the way in the Stefiuk brothers. Paul, a senior, is committed to Bradley. He was 2-0 with a 0.49 ERA in limited action last year. Ryan, a sophomore, committed to Vanderbilt last year and made the USA Baseball 15U National Team Trials roster in the summer. He was 3-0 with a 1.12 ERA and a no-hitter last spring. Senior lefty Quinn Williquette (2-0, 1.10 ERA) and Wagner (1-0, 0.35 ERA) were both solid on the mound last year as well. The Hornets have a good chance to win the Fox River Classic Conference for the third straight year after sharing the title with Bay Port in 2016 and winning it outright last year.

The Demons are on a hot streak as a program, making back-to-back appearances at the state tournament in the last two years—with their trip to Appleton in 2016 yielding a state title. They won 21 games last year before falling in the state quarterfinals to Arrowhead. They have all but two pitchers back from last year’s team. Trey Krause (7-1, 1.78 ERA) and Trent Turzenski (3-1, 3.38 ERA) both were significant parts of the pitching staff last spring and should be the Demons’ go-to guys this time around. Drew Pesick and Derek Koenen were both 2-1 last year and add depth on the mound.

Burlington’s lineup returns five starters, but the Demons will need to replace their four best hitters from last season. Krause (.300 average, 19 RBIs) and Koenen (.317, 12 RBIs) will be two of their top bats, and they’ll be supported by Grant Tully (.303), Riley Palmquist (.342) and Turzenski (.259, 10 RBIs). Given their winning pedigree over the last two years, the Demons are the slight favorites over Wilmot in the Southern Lakes Conference.

Arrowhead has played at the state tournament two years in a row, and is coming off a state semifinal appearance last June. The Warhawks went 22-5 last spring and have some talented players coming back this season. Their four returning starters were some of the team’s best hitters a year ago. Jeff Holtz (.452 average, 17 extra-base hits, 24 RBIs) was a second team All-Wisconsin pick, and Luke Dubnicka (.493, 8 extra-base hits, 21 RBIs) was an honorable mention All-Wisconsin selection. The Warhawks also have Alex Tanke (.439, 16 RBIs) and Bryce Toussaint (.377, 9 extra-base hits, 24 RBIs) back in the mix.

Davis Zeutzius (7-1, 1.18 ERA) was an honorable mention All-Wisconsin pitcher last year, and he should lead the pitching staff this spring. Jacob Johnson (2-0, 1.51 ERA) was one of Arrowhead’s top relievers last spring, and he’s back too along with Derek Polczynski (1-0, 3.50 ERA). If the Warhawks can find some more bats to round out their star-studded lineup and a couple of arms to get a little bit more depth on the mound, they’ll be in good position to be a 20-win team again.

The Cougars were 22-2 entering the playoffs last year, but were upset by Beloit Memorial in the sectional finals. Though they lost a lot of talent to graduation, they’ll still have more than enough left over to be one of the top teams in the state. Craig has four NCAA Division I recruits on the team: Catcher Jacob Campbell (Illinois), infielders Dan Blomgren (Michigan) and Noah Berghammer (Minnesota) and pitcher Mitchell Woelfle (Air Force). Campbell was a first team All-Wisconsin selection last year after hitting .463 with 14 extra-base hits and 37 RBIs, and Woelfle (7-1, 1.43 ERA) was honorable mention All-Wisconsin for his exploits on the mound.

The Cougars will need to replace two players who went off to Division I colleges last fall, but they’ve got the goods to do it. Luke Malmanger returns after earning first team All-Big Eight Conference honors last season, and James Brennan is a Judson University commit who’s back for another year.

Craig won the Big Eight last season, and faces yet another battle with Sun Prairie for the conference crown this spring.

Kimberly is the defending state champion in Division 1, and has had a run of success in the last five years that only Sun Prairie can match. The Papermakers have made four straight trips to the state tournament, with their worst finish to a season being a defeat in the state semifinals. They’re primed for another deep run this spring, with five starters returning to the field. Drew and Zach Lechnir are the twin sons of longtime UW-Oshkosh coach Tom Lechnir, and they’ll be two key pieces for the Papermakers’ lineup this year. Zach batted .359 with nine doubles, 15 RBIs and 19 stolen bases last season, and Drew hit .310 with 12 RBIs. They’re both juniors, as are John Nett (.412, 13 RBIs), Beau Schumacher (.275, 10 RBIs) and Connor Chitko (.415, nine RBIs)—all of whom played starting roles in Kimberly’s run to the state title last June.

Nett was the team’s No. 3 pitcher last year, and he’s the Papermakers’ top returning pitcher. He was 4-1 with a 2.18 ERA last season. He’s the only player returning with varsity pitching experience for Kimberly, so they’ll need to sort things out on the mound with some new faces.

If the Papermakers can get a few more arms to round out the pitching staff—and if recent history is any indication, they will—then they’ve got a real shot at defending their state championship this season. Every player listed above is a junior, so the Papermakers are set up for success for a couple of seasons.

The Cardinals finished as state runner-up last year, continuing the program’s run of excellence dating back to the early 2000s. They’ve won five state titles since 2005, and have played at the state tournament in five of the last six seasons. It’s a good time to be a Sun Prairie baseball fan, and that should be no different this spring. They have five starters returning from last year’s team in addition to three of their top five pitchers. Outfielder Carson Holin batted .440 with 12 extra-base hits last year to earn honorable mention All-Wisconsin recognition, and he’s back as a senior this season. Alex Oakley, the Cardinals’ cleanup hitter last year, should have one of the most powerful bats in the Big Eight Conference again this year. He hit .402 with nine extra-base hits and 25 RBIs last spring. Jack Zander (.318, 18 RBIs), Luke DePrey (.333), Ty Hamilton (.351, 11 RBIs) and Joe Hauser (.267, 15 RBIs) also return to the lineup.

On the mound, the Cardinals lost a couple of their best pitchers but have most throwers returning. Madison College commit Taylor Jansen (7-1, 2.64 ERA), Oakley (5-0, 3.08 ERA) and Hauser (2-2, 2.92 ERA) all return with a wealth of experience. Zander and Holin pitched 15 and 11 innings, respectively, last year.

Sun Prairie is the preseason favorite to win the Big Eight Conference after coming in second to Janesville Craig last year. This won’t surprise anyone, but the Cardinals will be tough to beat come playoff time, too.