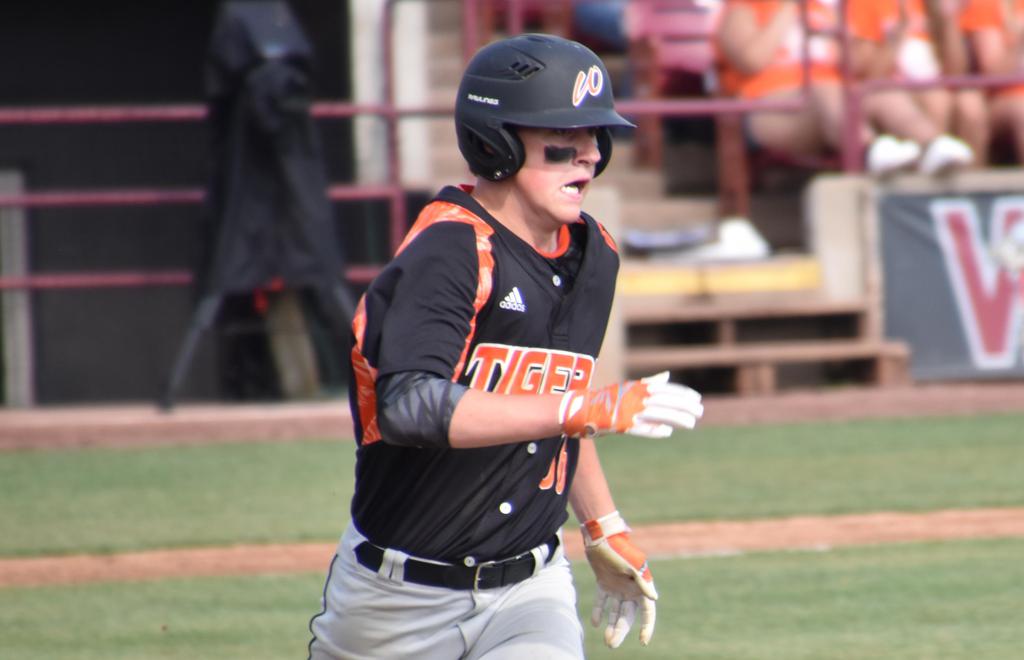 Webster's Jordan Larson runs to first base in the Division 4 state semifinals last June in Grand Chute. Larson was one of the few players who graduated for the Tigers last year (Spencer Flaten/Wisconsin Baseball Central).

Opening day of the 2018 WIAA spring baseball season is on March 27. Hundreds of teams will compete for a state championship, but only four will be crowned champions in June. Which teams look like they'll have the best chance at hoisting the gold trophy at the end of the season? Here are our preseason rankings for Division 3.

Laconia – The Spartans made a run to the state championship game last year. With five starters returning, which team shows up: the one that finished the regular season below .500 or the one that got hot in the playoffs?

Wisconsin Heights – The Vanguards were a game away from the state tournament last year, and return with two of their top pitchers and almost half their lineup.

Elk Mound – The Mounders were 18-8 last year and have over half of their lineup and most of their pitching staff back.

Winnebago Lutheran Academy – The Vikings were 16-4 last spring and have five players who earned all-conference recognition back this year.

Lake Country Lutheran – Most pitchers and five starters are back for the Lightning, including Tyler Brandenburg (.435, five HRs). LCL won 16 games last season.

Wittenberg-Birnamwood – The reigning Central Wisconsin 8 Conference champs have almost their entire roster back for this season.

Neillsville – The Eastern Cloverbelt Conference co-champs have most of their roster returning, including first team all-conference picks Logan Matson and Marshall Opelt.

Prairie du Chien – Hit hard by graduation, the Blackhawks still have four players who received all-conference recognition back from a squad that went 20-3 last year.

The Pirates entered the postseason with a 20-6 record last year, but were upset in their playoff opener by Neillsville. They’re back with most of their lineup this season, including their top hitter: Cole Nisbit. He batted .412 with 14 extra-base hits and 15 RBIs last spring. They have several players back who got significant playing time a year ago. That group includes Brady Drazkowski (.351, 12 RBIs), Jacob Boynton (.329, 23 RBIs) and Brad Schowalter (.288, 10 RBIs).

The pitching staff will need some retooling after the graduation of a solid senior class. It should start with Drake Bakkum, who pitched the second most innings on the team last year. He went 5-1 with a 1.62 ERA in 39 innings. Drazowski is the only other pitcher who brings back significant varsity experience on the mound—he had a 3.15 ERA in 13.1 innings.

The Dairyland Conference will be tough this year, but Cochrane-Fountain City figures to be in the mix along with Independence/Gilmanton and Eau Claire Immanuel Lutheran (two of the top teams in Division 4).

The Thunderbirds made their first ever state tournament appearance last spring, falling in a nine-inning thriller against Laconia in the state semifinals. They will have most of their pitching staff and two-thirds of their lineup back this season. Connor Kurki was 5-0 with a 1.07 ERA as a freshman last year, and Carter Kurki is back after posting a 2-2 record and a 2.30 ERA. Bryce Huettner was 4-1 as a sophomore last season.

The Thunderbirds should be able to compete for a Central Wisconsin 8 Conference title this season, but it won’t be easy to knock off defending champion Wittenberg-Birnamwood.

Durand was 20-8 last season, falling to Cumberland in the sectional finals. The Panthers have their entire pitching staff and two-thirds of their lineup returning this spring. Their ace, Josh Biesterveld, was a workhorse last year. He went 13-1 and posted a 1.74 ERA in 76.1 innings. The team has three other pitchers who threw at least 25 innings last year, but they didn’t have as much consistency as Biesterveld. Some improvement this year would make Durand difficult to score against.

The Large Dunn St. Croix Conference has been a battle between Durand and Elk Mound for the last two years, and that should continue this spring.

The Eagles went 16-4 in the regular season last spring, but lost in the regional finals to Cumberland. Six starters return from the lineup they fielded in that regional final, and they’ve got some solid pitchers back too. Jack Nelson hit .405 with 15 RBIs as a freshman last year, and he’s part of a returning group that includes Cody Ince (.286, 15 RBIs), Tommy Teschendorf (.281, five doubles) and Landon Hendrickson (.286, 14 RBIs).

The Eagles are probably the only team in the West Lakeland Conference with a realistic shot at beating Webster. They’ll likely be the Tigers’ stiffest competition in the hunt for the conference title.

The Zephyrs won 23 games and the West Six Rivers Conference title before falling to Darlington in the regional finals last year. They have six starters back this year, all of whom earned all-conference honors. First team West Six Rivers picks Jacob Berendes, Nolan Strang and Nathan Mowry are all back in the mix.

On the mound, the Zephyrs lost one of their top pitchers to graduation in Chris Trejo, but Berendes and Mowry both have pitching experience that should help the team.

Shullsburg/Benton held off Highland for the conference title last year, and they should get another fight from the Cardinals this time around. On paper, the Zephyrs have the goods to retain the conference crown.

Last year, the Beavers made their first state tournament appearance since 1998. They fell in the state semifinals to Aquinas, but have a significant portion of last season’s roster back this spring. Four of their top hitters are back, led by Kobe Berghammer (.375 average, 12 extra-base hits, 23 RBIs) and Jerrad Lindfors (.366, 14 RBIs). Max Narges (.346, 11 RBIs), Riley Bodsberg (.370, seven RBIs) and Reid Olson (.276, 18 RBIs) also return to the lineup.

Olson will be Cumberland’s top returning pitcher—he was 4-2 with a 1.73 ERA last year. Bodsberg also spent a lot of time on the mound, posting a 2-2 record and 0.56 ERA. Lindfors (2-0, 3.45 ERA) can provide some depth on the bump too. The Beavers are the early favorites to win the Heart O’ North Conference this year.

For most of last season, the Zephyrs owned the longest winning streak in the United States. That streak was snapped at 49 wins when St. Mary Catholic fell to Coleman in the sectional semifinals, their first loss since the 2015 season. The Zephyrs have five starters back this season, as well as most of their pitchers.

The Zephyrs have won a conference title four years in a row, and a fifth should be very attainable this season.

The Timberwolves won 18 games last year before falling in the Division 4 regional finals to eventual state tournament qualifier Oakfield. They’ve moved up to Division 3 this season, which should be an interesting test for a very talented team. They have their entire pitching staff and all but two starters back in the fold this spring.

Living Word Lutheran should battle University School and Lake Country Lutheran for the Midwest Classic Conference title this spring, and compete for a state tournament berth when the playoffs get going.

The Blugolds cruised to the Division 3 state title without much trouble last year, and they have a lot of talent returning this spring. Five returning starters will power the offense, led by 2017 Wisconsin Baseball Central Newcomer of the Year Jess Ondell. He hit .476 as a freshman last spring with 17 extra-base hits and 26 RBIs. Other bats coming back to the lineup include Jacob Savoldelli (.351, three home runs, 27 RBIs), Brandon Merfeld (.419) and Nick Schlicht (.239, two home runs, 13 RBIs).

The Blugolds will have their No. 2 and No. 3 pitchers from last year returning in Ondell (6-2, 2.37 ERA) and Savoldelli (3-2, 3.74 ERA). Schlicht also saw time on the mound and went 1-2 with a 3.71 ERA. There are some spots that need to be filled due to the loss of a strong senior class, but Aquinas figures to be one of the toughest Division 3 teams come playoff time. The Blugolds play in the largely Division 1 Mississippi Valley Conference, which should only help them in the postseason.

The Tigers are coming off their first ever state tournament appearance last year. They lost in the Division 4 semifinals to Independence/Gilmanton, and got bumped up to Division 3 this season. That shouldn’t be a problem, as the Tigers have an absurd amount of talent given their school’s small enrollment. Not only are they coached by former MLB pitcher Jarrod Washburn, but they have two Division 1 recruits on their pitching staff. Oregon State commit Jack Washburn, the son of the coach, was 8-0 with a 0.93 ERA and 111 strikeouts last year to earn honorable mention All-Wisconsin honors. West Virginia commit Hunter Rosenbaum wasn’t able to play on varsity last season due to transfer rules, but his addition this spring gives the team a huge boost. Trevor Gustafson (4-1, 3.11 ERA) and Caleb Pardun (1-1, 1.59 ERA) also return on the mound.

That pitching staff alone will win them plenty of games, but their offense also has eight starters returning from last year’s 21-7 team. Second team All-Wisconsin infielder Hunter Gustafson hit .518 with 19 extra-base hits (including seven home runs) and 51 RBIs a season ago. Washburn (.404, 32 RBIs), Trevor Gustafson (.368), Brad Sigfrids (.366, 26 RBIs) and Trenton Wols (.360) are some of the other top bats the Tigers have back.

Most teams in the West Lakeland Conference will have an incredibly tough time trying to compete with Webster, and it’s not inconceivable that the Tigers could enter the postseason undefeated. Apart from their conference matchups with No. 7 Unity, their toughest tests figure to come in nonconference play—they face the likes of No. 5 Cumberland, Clear Lake (ranked No. 3 in Division 4), Ellsworth (honorable mention in Division 2) and Regis. With the amount of talent Webster has, a first ever state championship is a realistic goal this spring.