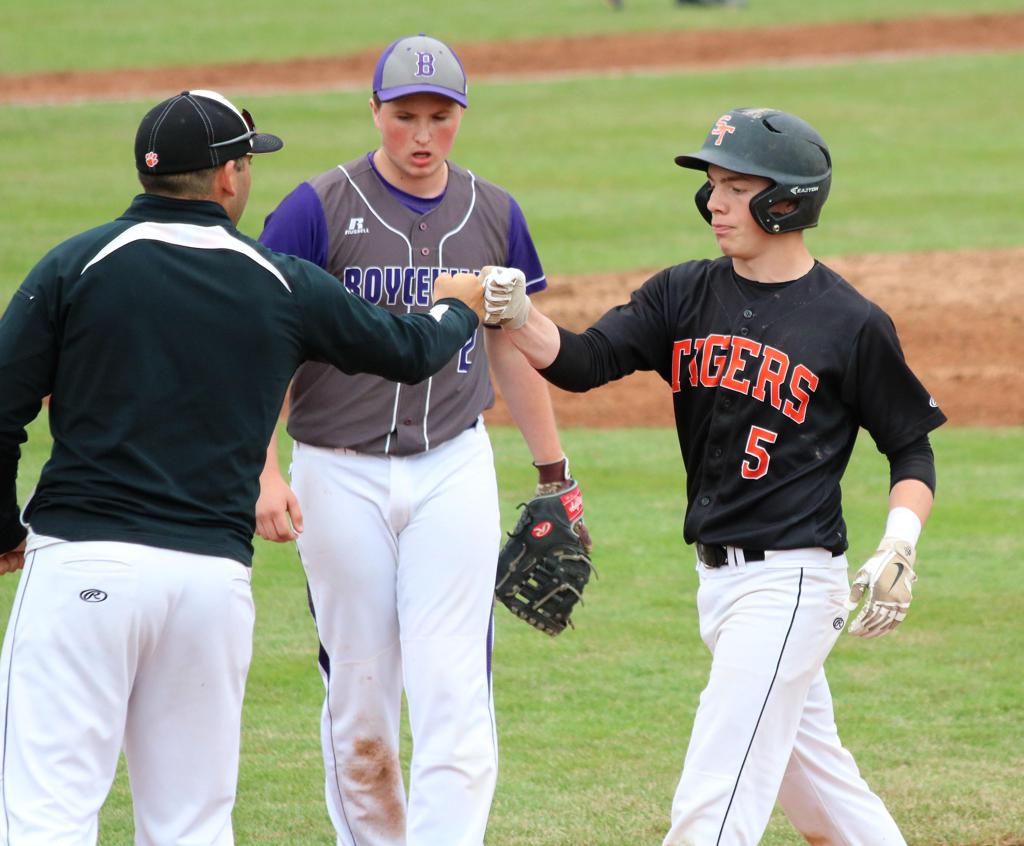 Stratford's Mav Licciardi gets a fist bump after hitting a single against Boyceville on Wednesday at Fox Cities Stadium in Grand Chute.

GRAND CHUTE — Three runs in the fifth inning broke a 4-4 tie and sent Stratford into the Division 3 state championship game.

But the Tigers had to hold off a persistent Boyceville team to get there.

Riley Bauman broke the tie with an RBI double in the bottom of the fifth, and the Tigers tacked on two more runs after to break a deadlock that had been going for several innings.

Stratford (21-2) had taken a 4-0 lead in the first inning with the help of a two-RBI single by Mav Licciardi and RBI singles from Dawson Moen and Bauman. But Boyceville (19-4) answered with three runs in the second and one in the third to tie things up.

Jaden Reisimer had an RBI hit in the second for Boyceville, and Jacob Granley had his own in the third.

Boyceville reliever Walker Retz settled things down after the shaky start for the Bulldogs. He pitched four innings and held the Tigers to three hits, but the three-run fifth inning gave him the loss.

Lance Heidmann got the victory, pitching the first five innings before giving way to Chandler Schmidt. The reliever pitched two scoreless frames for the save.

Retz drove in a run for Boyceville in the sixth, but that was all the offense the Bulldogs had left in them.

Schmidt, Bauman, Licciardi and Eli Drexler all had two hits for Stratford. Retz was a perfect 3 for 3 for Boyceville, and Reisimer and Connor Sempf added two hits apiece.

Stratford will face either Markesan or Ozaukee in the Division 3 championship game on Thursday.