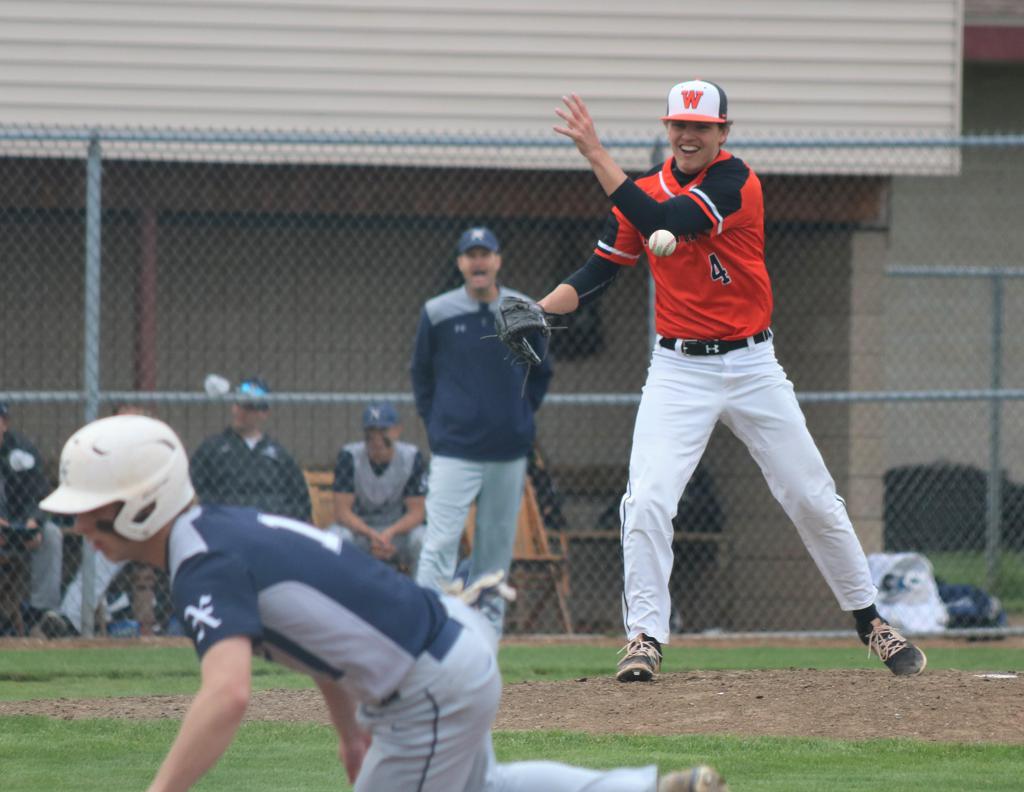 West De Pere's Connor Langreder attempts to pick off a Xavier runner on May 11, 2019 in Appleton.

The 2019 WIAA spring baseball season is underway. These are our sixth power rankings of the season. The top 15 is ranked regardless of Division. The top five for each Division can be found at the bottom of the page.

The Tigers climb into the top 15 for the first time this spring on the back of a two-game split with No. 4 Waupun. Ripon is the only team to beat the defending Division 2 state champions this season. Unfortunately for the Tigers, they’re one game back of the Warriors in the East Central Conference standings with two games left to play. They’ll need some help to become conference champions. Ripon takes on Kewaskum and Westby this week.

The Panthers enter the top 15 for the first time this season. It’s a good time to be a Panther: They clinched the Woodland West Conference title last week and have won 15 of their 17 games this spring. They outscored their opponents 50-5 across their last three games. They have six contests scheduled for this week, highlighted by a Saturday game against Franklin (honorable mention this week).

It’s impossible to have a better week than the Red Devils just did. Three games, three no-hitters. Bradford not only swept three games from Racine Park, it didn’t allow a single hit in the series. Jarrett Ramer struck out 11 in the first no-no, Kyle McKinnon did the same in the second, and Nick Cairo fanned 10 in the third one. Things won’t be quite so easy this week, with games against Franklin (honorable mention), Kenosha Indian Trail and Westosha Central.

The Blue Dukes carry an 11-game win streak and have not lost since April 15. It took a walk-off double by Owen Jonas to keep that streak alive in a 3-2 win over Cedarburg on Saturday. They also swept West Bend West last week. They can wrap up the North Shore Conference title with a few more wins this week. They take on Grafton and West Bend East in league play, and Waukesha South in nonconference action.

The Broncos won all three of their games last week without much of a test, winning by six or more runs each time. They swept two games against Badger and also beat Racine Park. They are still alive in the Southern Lakes Conference title hunt, although they trail top-ranked Burlington by one game with two left to play. They take on Racine Case, Waterford and Muskego this week to finish off their regular season slate.

The chances of the Tigers finishing the regular season undefeated get better with each passing day. Last year’s Division 3 state champions have won all 18 of their games this spring and have hardly been challenged at all in the process. As expected in the preseason, when it comes time for the Division 4 playoffs, Webster will be the team to beat. At No. 10 this week, they have achieved the highest ranking by a Division 4 team in the six-year history of Wisconsin Baseball Central's power rankings.

The Polar Bears got off to a poor start to the week, dropping games to No. 3 Kimberly and Appleton East. They rebounded though, topping Appleton North and Oshkosh North to end the week. They’ll look for more consistency this week when they take on Kaukauna and Appleton West.

It was a rough week for the reigning Division 1 state champions. They went 1-3 over the course of four games, dropping contests against Verona, Sauk Prairie and No. 2 Janesville Craig. The only win came against Sauk Prairie to salvage a two-game split. The Warriors will try to get back on track with games against Beaver Dam, Medford and Mount Horeb this week.

Another week has gone by without the Trojans losing a game. They’re unbeaten after taking down McFarland and Whitewater (twice) last week. With only four games left on their schedule, Turner has a shot at taking an undefeated record into the playoffs. The Rock Valley Conference champions play Clinton twice this week before facing two tough teams in nonconference play: Lake Country Lutheran and Catholic Memorial.

It’s now an eight-game win streak for the Hornets after taking care of business four times last week. Perhaps the best of the bunch was a 1-0 win over a Bay Port team that has been red-hot in May. It’s getting down to crunch time in the chase for the Fox River Classic title, and Preble holds a one-game lead over Bay Port and De Pere with five games left to play. The Hornets take on Oshkosh West, Sheboygan North, Ashwaubenon and Notre Dame this week.

The Phantoms have won eight games in a row, and four of their last five have been victories by over five runs. They’ve got a two-game lead in the Bay Conference standings and four games left to play, and can clinch the title this week. It would be a fifth straight conference title. They take on second-place Menasha on Monday before games against Shawano and Fond du Lac later in the week.

The Warriors saw a 25-game win streak come to an end last week when they fell to No. 15 Ripon. The good news for Waupun is that they split the series with the Tigers, and also bounced back with a win over Markesan, a highly-ranked Division 3 team. The Warriors can clinch the East Central Conference title with two wins over Plymouth this week.

The Papermakers went a long way toward capturing the Fox Valley Association title last week, winning three league games highlighted by an 11-5 victory over No. 9 Hortonville. With six games left on the schedule, they have a two-game cushion atop the standings. They’ll look to hold serve this week against Appleton North and Oshkosh North before they take on Hortonville and Appleton West – the other two contenders – in the final week of the regular season.

The Cougars’ flawless week saw them win all four of their games, highlighted by a 6-2 victory over No. 8 Waunakee on Saturday. They’ve won eight in a row since falling to top-ranked Burlington. They can close out the Big Eight Conference title with two games against Madison West this week. They also take on Homestead this Saturday.

The Demons remain the top-ranked team in the state for the third week in a row after going 3-1 last week. They swept two games from Waterford, beat Waukesha West and fell to Jefferson. Two wins over Wilmot this week would make Burlington the Southern Lakes Conference champion. They also face Kenosha Tremper (honorable mention this week) and Muskego on Monday and Friday, respectively.