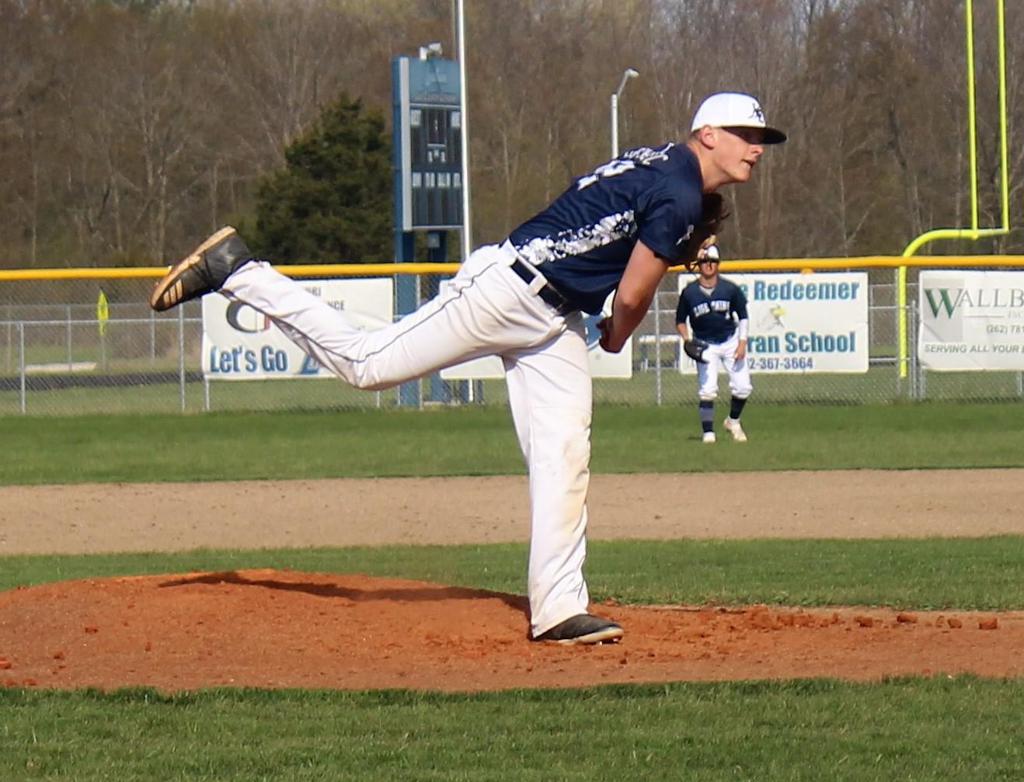 HARTLAND — The Lightning of Lake Country Lutheran accomplished Tuesday what no team in the Midwest Classic has done all season:  hold Living Word Lutheran scoreless.

Lake Country Lutheran handed the Wolves their first loss of the season, winning 7-0 at home behind the gutsy pitching performance of Simon Dembiec.

“This is a big win for us,” said Lake Country Lutheran head coach David Bahr.  “For the first time this year, we are playing well consistently.  It puts in a good spot in the conference.”

The game began as a pitching duel between Dembiec and Jimmy Juergensen.  The two pitchers combined for 14 strikeouts.

Juergensen struck out three batters in the first inning, getting the third out with runners on second and third.  But the Lake Country bats worked away to the Living Word senior, finally breaking through in the third inning.

“I told the boys that we just had to put the ball in play,” said Bahr.  “If we got baserunners, and got our hits, we would be in a good spot, and that’s what happened.”

After Will Brazgel and Jack Leverenz both reached after getting hit by a Juergensen pitch, Dembiec sent a low liner into shallow center to score Brazgel, giving Lake Country a 1-0 lead.  In the fourth, Andrew Schumacher scored after Eion Kennedy sent a looping fly ball into left center.

It all came together for the Lightning in the bottom of the fifth, with Lake Country scoring four runs off four hits.  Schumacher and Tyler Martens both hit RBI singles.  Juergensen was taken off the mound with one out left, and Dillon Wisniewski took the mound.  The Lighting picked up their fourth run when Nick Rupprecht hit a sacrifice fly to the left field line, scoring Corey Lidner.

Dembiec’s pitching frustrated the Wolves, a team that has scored in double digits in six of its 10 wins while shutting out opponents five times.  The senior struck out nine batters in his second complete game of the season.

“His placement has been really good recently,” said Bahr.  “And his endurance.  He has always been good with the pitch count, so he’s a guy we can keep in there a little longer as long as he is getting strikes.”

Lake Country Lutheran moves into second place in the Midwest Classic, one game behind undefeated-in-conference-play University School with a tie breaker over Living Word.  The Lighting face USM Wednesday with a rematch against Living Word Thursday.  The Wolves will play the conference leader University School twice this week.