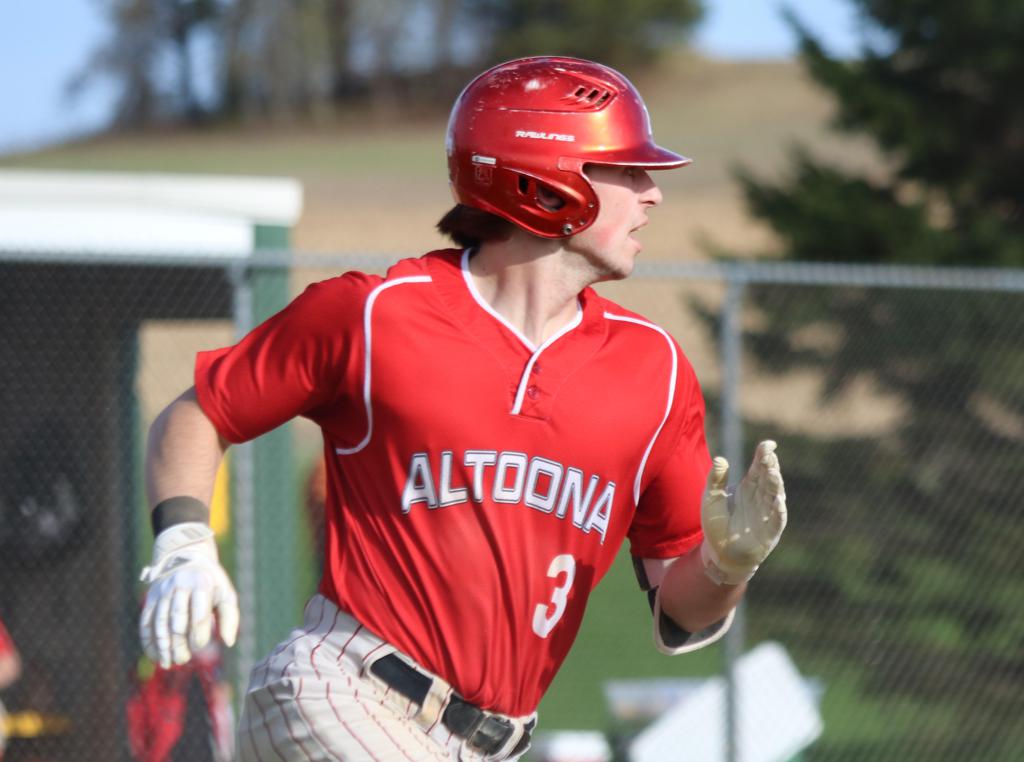 Altoona's Jake Nelson watches a double drop in front of the fence on May 6, 2019 in Fall Creek.

A four-run fourth inning — highlighted by a two-RBI single by Jake Varsho and RBIs from Nelson and Blake Loegering — proved to be the difference for the Rails. It turned a 2-2 tie into a 6-2 advantage for Altoona (11-3).

Nelson finished 2 for 2 with both of his hits for extra bases. The Madison College recruit also stole two bags and drew two walks.

The Rails overcame a huge day at the plate from Fall Creek's Marcus Cline. The UW-Milwaukee recruit went 3 for 4 with a double and a stolen base for the Crickets (12-3).

With the win, Altoona took joint custody of the top spot in the WCC standings along with Fall Creek. Both teams sport 8-2 records in league play.

Lau took over on the mound for starter Varsho in the third inning. He allowed just one unearned run over the next four innings to earn the win.

Altoona chased Fall Creek starter Isaiah Katz from the game after getting just one out in the first. Brady Nicks did well to mop up a bases-loaded jam though, escaping with his Crickets only down 1-0.

Katz evened the score at 1-1 with an RBI double in the bottom of the first. Both teams traded runs in the third before Altoona broke things open in the fourth.

With runners on first and second and two outs in the fourth, Nelson ripped an RBI double to left field to give Altoona the lead. Varsho knocked in two with a single in the ensuing at-bat, and Loegering followed shortly after with a Texas-leaguer pop-up for an RBI.

Down 8-2 entering the bottom of the seventh, the Crickets plated two runs on Altoona errors, but couldn't do any more damage.

Altoona and Fall Creek play the second and final game of the series on Tuesday, with the winner of that game going on to hold first place in the conference at the expense of the other. Eau Claire Regis is also hanging around, and can grab a share of first place with a win over Stanley-Boyd on Tuesday.