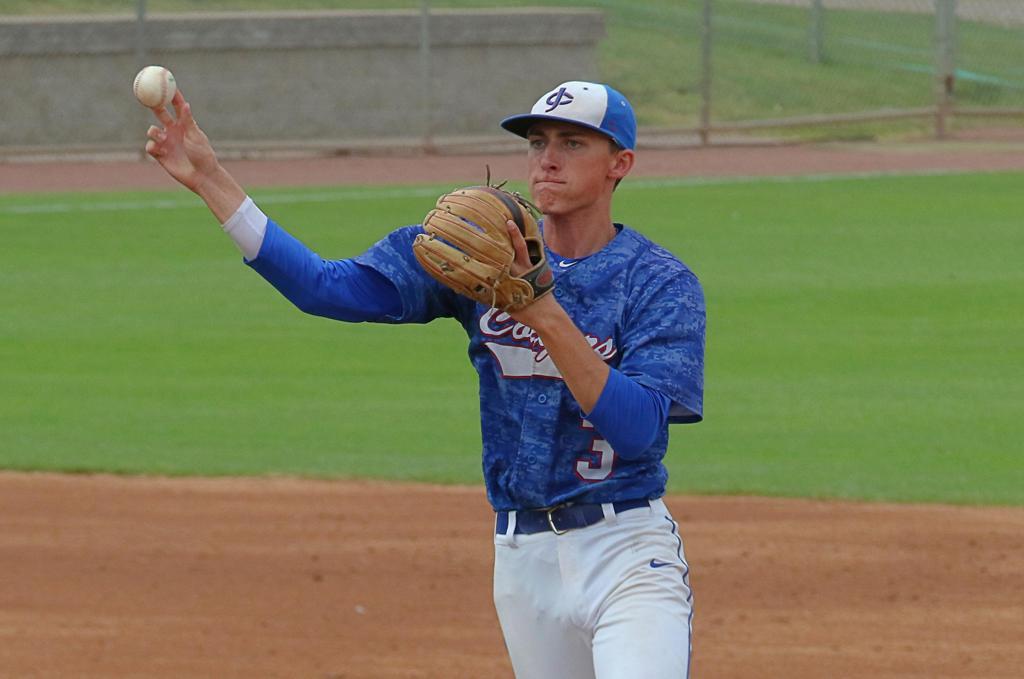 Janesville Craig's Jacob Hesseling throws to first base during the 2018 Division 1 state quarterfinals in Grand Chute.

The 2019 WIAA spring baseball season is underway. These are our second power rankings of the season. The top 15 is ranked regardless of Division. The top five for each Division can be found at the bottom of the page.

The Polar Bears won their only game last week, defeating Appleton East 4-3. That improved their record to 4-1 this spring, with their sole loss coming at the hands of No. 14 West De Pere. They have games against Oshkosh North and Kaukauna this week.

The Phantoms went 1-1 last week, beating Xavier but falling to Seymour. In the win over Xavier, Cameron Dupont homered and drove in four runs. It helped put a tough finish to the Seymour game behind the Phantoms: they lost a 7-1 lead in the fifth inning against the Thunder. Games against Shawano, Green Bay East/West and Appleton West are scheduled for this week.

The Warhawks played and lost one game last week, falling 7-3 to No. 12 Muskego. They’re now 4-2 on the season, and will look to get back in the win column with games against No. 1 Waunakee and Kettle Moraine this week. The game against Waunakee is a rematch of last year’s state championship game.

Last year’s summer state champions are 3-1 this season after beating No. 13 Arrowhead in their only game last week. Steve Jamroziak picked up two hits in the win, and Alex Jamroziak was solid on the mound. The Warriors have games against South Milwaukee and Catholic Memorial this week. Both are honorable mentions in these rankings.

The Suns are off to a 7-0 start this spring following two wins last week. They defeated Port Washington 30-1 and Mukwonago 9-1. Cooper Schlosser had six hits and seven RBIs over the course of the two games. They will get their first test against a ranked team with two matchups against No. 9 West Bend West this week.

Last season’s Division 2 state champions are unbeaten this season, and have won 17 games in a row dating back to last year. The Warriors beat Lomira and Kettle Moraine Lutheran last week, with Reece Homan driving in five runs over the course of the two games. Two contests against Winneconne are scheduled for this week.

A win in their only game of the week pushed the Spartans’ record to 5-1 this spring. They beat Nicolet 8-6, with Lukas Broske driving in four runs and earning the save. Two ranked battles with No. 11 West Bend East are slated for this week.

The Sabers are unbeaten at 7-0 this season following three wins over Racine Case last week. They also have a win over No. 12 Muskego to their credit. They’ll look to keep their loss column unblemished with three games against Oak Creek this week.

The Demons went 3-0 last week, sweeping a doubleheader against Badger and topping Delavan-Darien. They outscored opponents 37-5 in the week. Trey Krause struck out 16 hitters in a complete game effort against Badger. They play Racine Case and Elkhorn this week before a Saturday matchup with No. 2 Janesville Craig.

The Hawks stayed hot last week, beating Racine Park three times to improve to 7-1 on the season. They scored 43 runs across the three games. Up next is three more games against Racine competition. They play Racine Case in a three-game series this week.

The Papermakers defeated Neenah 10-1 in their only game against Wisconsin competition last week. John Nett tallied three hits in the win, and Beau Schumacher and Gavin Lefeber both homered. They also picked up two wins in Ohio. Kimberly only has one game scheduled for this week: on the road at Appleton North on Thursday.

The Hornets only played one game last week, a 4-1 win over Manitowoc Lincoln. Max Wagner homered in the win, and Connor Shefchik added two hits. Games against Notre Dame, Bay Port and Sheboygan North are on the slate this week.

The Red Devils took care of business in a major way last week, sweeping a three-game series against Oak Creek, which was ranked No. 5 at the time. They also beat Wilmot over the weekend, keeping them undefeated at 7-0. The offense produced 35 runs over the course of the week. They’ll look to keep the momentum going with a three-game series against Kenosha Tremper this week.

The Cougars remain undefeated this spring following two wins last week. They beat rival Janesville Parker 7-0 and Verona 4-1. In six games this year, they’ve only surrendered nine total runs. That includes two shutouts. This week is highlighted by two matchups with Big Eight foe Sun Prairie and a nonconference bout against No. 7 Burlington.

The reigning Division 1 state champs won their only game last week to stay unbeaten this season. The Warriors broke out the bats in a 9-3 win over DeForest, bashing 12 hits – including home runs from Joe Hauser and Nate Stevens. Nick Smith struck out 10 in five innings on the mound. Games against No. 13 Arrowhead — a rematch of the Division 1 state title game — and Baraboo are slated for this week.